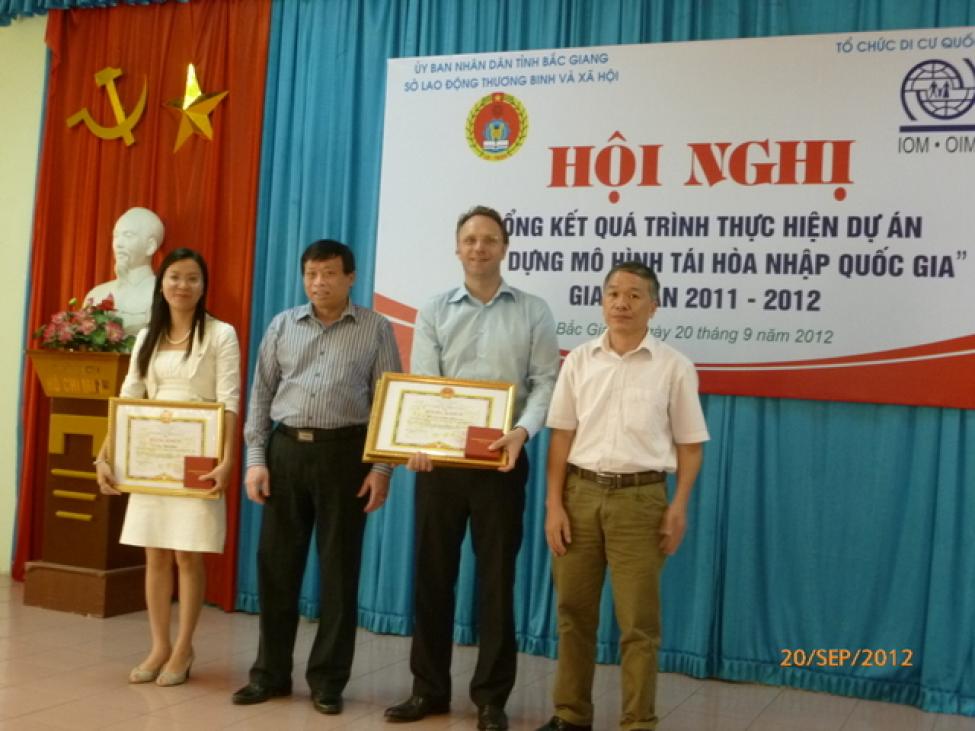 Yesterday (Thursday 20th), IOM was awarded by the Head of the Vietnamese Bac Giang People’s Committee, Mr. Bui Van Hai, the prestigious Certificate of Merit (“Bang Khen”) for its significant contribution to the support to victims of human trafficking in Bac Giang province from 2009 – 2012.

Trafficking in migrants remains a topic of great concern in Vietnam. Especially the trafficking of Vietnamese children, women and men to China for the purpose of sexual or labor exploitation is of growing concern.

Bac Giang province, home to some 1.7 million people, located between the bustling Vietnamese Capital of Ha Noi and the two mountainous North-Western border provinces with China, Lang Son and Quang Ninh, has been identified as a new trafficking hotspot. Victims come from the province itself, mainly form its poorer communes in the hills, and from provinces much further south transiting through Bac Giang.

Thousands of persons have so far been detected crossing illegally to China, among them a suspected high number of victims of human trafficking. So far 125 victims of trafficking (among them 122 to China) have been officially identified in Bac Giang province alone, the dark figure is estimated to be much higher.

Over the last 4 years, IOM’s work in the province, in close cooperation with the Department of Social and Labour Affairs and with financial support from the US State Department (PRM) concentrated on the establishment of self help groups for trafficking survivors, and further victim support through alternative income generation models. The self help groups pilot has been evaluated positively and is now being replicated in other Vietnamese provinces under the 2011- 2015 Vietnamese National Plan of Action against Human Trafficking

The distinction was awarded to IOM as an Organization, as well as to two IOM staff members, Ms. Dang Thuy Hanh, Project Officer, and Mr. Florian G. Forster, Chief of Mission IOM Vietnam. “I feel deeply honored to receive this well-respected Bang Khen”, says Dang Thuy Hanh. “To have witnessed the women in the self-help groups regaining their self-esteem and to see them taking back control of their lives has already been hugely rewarding; to now see that this is recognized at the highest levels is indeed gratifying”.

IOM is an active participant in the One UN Initiative in Viet Nam, which aims to combine and synthesize the work of the resident UN organizations within a single planning framework to better support Viet Nam. As the leading intergovernmental agency working in the area of migration,, IOM Viet Nam convenes the UN Working Group on Human Trafficking and cooperates closely with regional, national and provincial partners to put an end to the exploitation of migrants. IOM’s work focuses on the prevention of trafficking, the prosecution of perpetrators, the protection of victims (including their reintegration), as well as continued support to policy development.

Subscribe to IOM newsletter to receive the latest news and stories about migration.